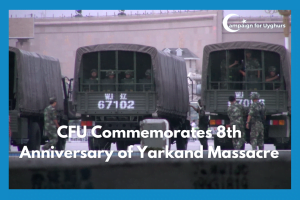 Campaign for Uyghurs (CFU) commemorates the eighth anniversary of the Yarkand massacre and remembers all those who were killed on July 28, 2014 and the days after. Eight years ago, Uyghur protesters were violently suppressed by Chinese security forces in Yarkand, resulting in innocent civilian deaths. The escalation of discriminatory state policies since then has resulted in the arbitrary detention of millions of Uyghurs and other Turkic people, which has been determined as genocide.

There has been no clarity about what transpired in July 2014 and the days following, and details remain murky to this day. It is unclear how many people were arrested, murdered, or disappeared. Sadly, the families of the missing and deceased have been left with little to no transparency, accountability, or justice. Following the incident, internet and cellular communication were suspended in East Turkistan and Chinese state media continued to alter the number of deaths that took place.

Uyghurs have consistently been subjected to harsh repression by the Chinese government under the guise of ‘combating terrorism‘. It is providing the state with further cover to apply inappropriate labels to Uyghurs who criticize state policies under a 2016 Counter-Terror Law, which has been heavily criticized by rights groups.

Executive Director Rushan Abbas said: “The Yarkand Massacre is yet another reminder of the brutal crackdown by the Chinese government imposed on Uyghurs. The world did not do enough to hold China to account in the aftermath of the Urumchi Massacre, and it once again failed to do so after Yarkand. The time is now to guarantee Uyghurs their fundamental freedoms and hold the Chinese government accountable.”

The Yarkand massacre is another in a long string of violent and brutal repression of Uyghurs who have demonstrated peacefully for their rights. Each time, these acts of protests have been met with lethal retaliation and heavy handed oppression of Uyghurs. These policies have paved the road to the mass atrocities and crimes against humanity that the CCP perpetrates today.

CFU demands the Chinese regime act immediately and transparently to reveal the whereabouts and fate of the missing and deceased. CFU stresses the urgency of the crisis in East Turkistan, calling on the international community, including nations, NGOs, and international organizations, to take meaningful and concrete steps to end the Uyghur genocide by sanctioning CCP officials responsible for carrying out the Yarkand massacre and the Uyghur genocide.