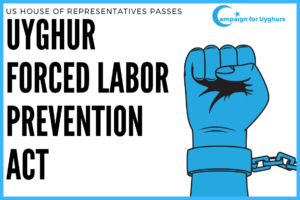 It is a bright day for Uyghurs around the world as today the United States House of Representatives passed the Uyghur Forced Labor Prevention Act (UFLPA). This legislation takes meaningful action to prevent the flow of goods produced using Uyghur forced labor from entering the United States, striking a blow at the economic incentive at the heart of the Chinese Communist Party’s actions. Campaign for Uyghurs (CFU) applauds all those who have championed the passage of this bill.

CFU wishes to offer a special congratulations to those members of the Uyghur Caucus, created earlier this year by Rep. Tom Suozzi (D-NY) and Rep. Chris Smith (R-NJ) at the request of CFU. Their impact in heralding this legislation through the House and to passage is immeasurable, and they have the gratitude of the entire Uyghur community.

Speaking to CFU, Representative Tom Suozzi (D-NY) said “Put simply, we’re talking about crimes against humanity being perpetrated by the Chinese government. We need to hold the Chinese Communist Party accountable for these acts that violate our very conscience. Some people are going to say, ‘Oh my gosh, if we don’t do business with Xinjiang, the cost of products will go up.’ Well, that’s too damn bad. This should shock everyone’s conscience. The United States must stand up for its values and make it clear that we will not be complicit in the internment and forced labor of Uyghur Muslims.”

The UFLPA will require US Customs and Border Control to first determine if goods entering the United States from the Xinjiang region were produced using coerced labor, before allowing them into the country. It also requires these findings to be reported to Congress and gives the power to sanction firms and individuals found to be engaging in forced labor practices. In 2020, CFU’s Executive Director testified on the merits of the UFLPA both for the Congressional Committee on Ways and Means and a round table for the Congressional-Executive Committee on China. It is a prideful day to see it pass this chamber.

CFU Executive Director Rushan Abbas said “In conjunction with the diplomatic boycott of the 2022 Beijing Olympics announced by the administration Monday, the passage of this bill would solidify the position of the United States as a leader in the humanitarian response to the Uyghur genocide. It is with great pride, and even more inspiration, that I sincerely congratulate the House on the passage of this bill, and urge the Senate to take similar action. This will be a firm response to the genocide being conducted by the CCP, one that declares unequivocally that the United States will not allow its markets to be stained by the stolen labor of the Uyghurs slaving away in Chinese factories. I hope the world is watching today, and that they will soon see an example to follow in repudiating this atrocious crime.”

CFU is grateful to all the Representatives that heard the pleas of organizations around the world and have decided to act. This is the courage the world needs now, and the leadership it seeks. It is now up to the Senate to act and pass this legislation, guaranteeing the United States’ role as a leader on human rights around the world.