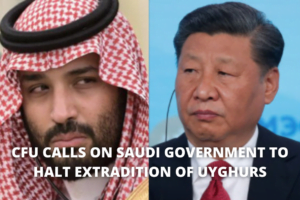 Campaign for Uyghurs (CFU) calls upon Saudi authorities to immediately release four Uyghurs – including a 13-year-old girl and her mother – who are at serious danger of being taken to oppressive concentration camps if sent back to East Turkistan. If deported, Aimidoula Waili, his friend Nuermaimaiti Ruze, as well as Nuermaimaiti’s former wife Buheliqiemu Abula and their 13-year-old daughter Baibure will face torture, arbitrary detention and persecution.

Handing these four people – including a child – to Chinese authorities, where Uyghurs and other ethnic groups are facing a horrific campaign of mass internment, persecution and torture, would be an outrageous violation of international law. Muhammad Bin-Salman, the crown prince of Saudi Arabia, must defend his faith and deliver his responsibility as a true leader and not deport these innocent Uyghurs.

With time seemingly running out to save the four Uyghurs from this catastrophic extradition, it is crucial that other governments with diplomatic ties to Saudi Arabia step in now to urge the Riyadh authorities to uphold their obligations and stop the deportations.

Executive Director Rushan Abbas said today “Under international law and as a Party to the UN Convention against Torture, Saudi Arabia is obliged not to return anyone to a country where they would face a real risk of torture or other cruel, inhumane or degrading treatment or punishment, persecution and other serious human rights violations. The Saudi government must abandon any attempt to extradite the four Uyghurs into China’s hands and release them from detention immediately.”

Uyghurs all around the world have been holding protests in front of the Saudi Embassies and Consulates urging the Saudi government not to be complicit in China’s genocide by extraditing the four Uyghurs. In a protest held in front of the Saudi Embassy in Washington DC yesterday, CFU along with Free Uyghurs Now, CAIR and other Uyghur organizations joined in this call by reminding the Saudis to hold onto the principles of the Noble Quran in protecting their fellow Muslims, the very principles the Kingdom of Saudi Arabia is built on. At the protest, Program Manager Arslan Hidayat said “Whilst you’re enjoying the beautiful atmosphere in Makkah, the authorities detain you and prepare to deport you back to the country you fled from. If deported, they would face torture, arbitrary detention and persecution. They’ll be sent to concentration camps across East Turkistan where they are forced to denounce Islam.”

Strategic allies of Saudi Arabia, such as the United States, must not stand by while it willfully ignores human rights law. The international community must do everything it can to prevent the illegal extradition of Uyghurs.

We also call on other freedom loving nations to open their doors to provide safe haven to these four Uyghurs, whose lives are in imminent danger, should they be released from Saudi detention.