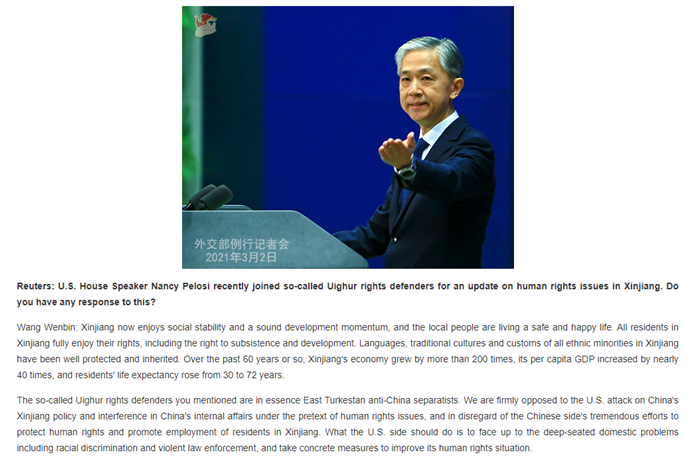 Campaign for Uyghurs (CFU) was attacked by the Chinese Foreign Ministry on Tuesday, March 2, in a briefing statement by Foreign Ministry Spokesperson Wang Wenbin. The remarks came in response to a public tweet from the United States House Speaker Nancy Pelosi about her meeting with CFU.

Minister Wang stated that members of CFU were “anti-China separatists” and pointed out that we were not “religious figures”. In his eagerness to use the meeting as an excuse to attack human rights activists and U.S. politicians, he once again ignored facts. Members of CFU were not presented as religious figures but rather aimed to speak on the genocidal crimes against Uyghurs, women in particular, and actions that should be taken by the U.S. to address them.

Rather than providing the transparency to prove its own supposed “innocence” the Chinese State has yet again resorted to libel and slander. Chinese State media has previously accused Rushan Abbas, saying that she had lied regarding her missing sister before confirming her detention in a statement on December 31, 2020.

This has also not been the first time that Speaker Pelosi was criticized by the Chinese Foreign Ministry. Previously, she was also attacked for meeting with Hong Kong activists.

In response to more defamation by the Chinese State, CFU Executive Director Rushan Abbas stated “How much longer will we allow Chinese State actors to spread their lies without consequences? They lie without qualms regarding our organization, and attack a respected member of the U.S. Congress yet again, a clear indication that our messaging has been on point. How much longer will they continuously have access to our social media platforms to take advantage of our freedom of speech to spread their disinformation targeting US citizens? ”

These attempts by the CCP will not deter the United States from its responsibility to address this genocide. Campaign For Uyghurs remains dedicated to working on a bipartisan basis to ensure that the Chinese regime’s genocidal crimes will be stopped and that justice will be had.