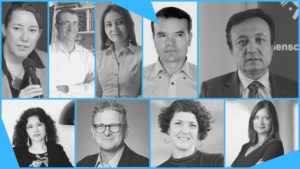 Some of the experts and fact witnesses for the upcoming Uyghur Tribunal.

This week will mark a historic step in the fight against genocide, and for human rights. In the United Kingdom, an independent tribunal is being held on the situation in East Turkistan, to set an international standard for the truth of the events transpiring there. Though independent nations have taken it upon themselves to declare the crisis a genocide, this tribunal is not on behalf of any single nation or organization, but is instead a public trial for the world to witness. In a show of good faith, Chinese representatives were invited to defend themselves and their actions in East Turkistan. Instead of doing so, they have chosen to denounce the tribunal as “interference in China’s internal affairs”.

Now, witnesses will have the opportunity to share their stories and voices in one place where all available evidence can be compiled. For years families have lived in terror abroad as they worry for the fate of their relatives behind the wall of the CCP’s influence and control. Now, they will take the narrative into their own hands. Campaign for Uyghurs (CFU) is thankful to the organizers of this tribunal, and expresses the utmost respect for the witnesses who have come forth to testify.

Already, the Chinese regime has targeted these brave Uyghurs for standing against them. Hushtar Isa, brother of World Uyghur Congress President Dolkun Isa, was sentenced to life in prison, in what is clearly retaliation for his brother’s advocacy work. Mr. Dolkun Isa will testify on the ongoing genocide against his people at the Uyghur tribunal. In advance of the occasion, he said, “It is my responsibility, and the responsibility of every human being, to declare unequivocally that we cannot allow the erasure of a people! Though we are targeted, harassed, and our families are treated as criminals, we must not give in. It is not the fault of the Uyghur who speaks if there is retaliation. It is the fault of a regime that does not respect human life or dignity, that treats us as an obstacle to be removed. We know that if we do not speak the sentences will not stop, the interments will not end, the sufferings will not abate. Only when the world demands these things will the suffering come to a close. We will testify, and we will show the entire world the reality of life in East Turkistan, we will show them the true face of the CCP.”

Other witnesses have felt threatened by the omnipresent online footprint of the Chinese State, and the dramatic rise in propaganda efforts has shown that this event is meaningful to the regime. Campaign for Uyghurs applauds this effort to create transparency where none has been given, and is proud to stand with the witnesses whose testimony will be shared. Rushan Abbas, Executive Director of Campaign for Uyghurs, will be sharing her testimony regarding the disappearance of her sister Dr. Gulshan Abbas and her husband Abdulhakim Idris’s entire family by the Chinese state. She said “Now is the moment when the doors of history shall be opened wide for the Uyghur people. We will push through them and tell our story so that it can be examined and explored. All around the world people will be able to hear testimony after testimony on the genocide being perpetrated by the  Chinese regime, and we hope that the international community will reflect on what they can do to bring it to an end. All the world must do is be willing to go through those doors and confront the future we wish to build, where all human beings are deserving of basic rights, freedom and dignity.”