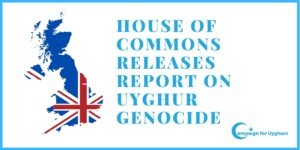 Campaign For Uyghurs (CFU) applauds the excellent work of the UK Parliamentary Foreign Affairs Committee on the release of the report “Never Again: The UK’s Responsibility to Act on Atrocities in Xinjiang and Beyond”. CFU Executive Director Rushan Abbas testified for the hearing before the committee preceding the report on April 13, 2021.

Among the valuable recommendations and perspectives contained in the report, acknowledgment of the Olympics as an issue of legitimizing the brutal Beijing regime was highlighted.

In her testimony before the UK Parliamentary Foreign Affairs Committee, Rushan Abbas remarked that “Countries should go beyond paying lip service. We must address our own complicity while recognizing that there are true evils on a level many of us have been privileged to avoid seeing or experiencing and which are wholly unchecked today in China. The UK should join in a call for a boycott of the 2022 Olympic games and should at least make it clear that the diplomatic boycott is the bare minimum.” and continued to say “It is absolutely preposterous that the United Kingdom would even entertain the idea of normalizing a genocidal regime hosting these games, having learnt nothing from the 1936 Berlin games.”

CFU notes that the House of Commons will hold a hearing next Thursday, July 15th, on a motion to diplomatically boycott the Beijing Winter Olympics, and hopes to see that this will be passed. The UK government to adopt all recommendations contained in the report, and fiercely condemns remarks by UK Prime Minister Boris Johnson that an “anti-China spirit” shouldn’t eliminate Chinese investment. His remarks that provoking such things would be “economically foolhardy” completely neglect the consideration of the cost of choosing to remain morally bankrupt in ignoring genocide and its severe global implications.

Campaign For Uyghurs urges the Prime Minister to stand by his words to consider the proposal of a diplomatic boycott as a bare minimum for addressing a genocidal regime, and urges the government of the United Kingdom to fully embrace its role as a true leader in the international community. The future will be dark for the entire world, not only the Uyghurs, if we fail to stop this genocide, as the CCP is waging war on humanity, a war on democracy and an attack on the free world.

If you are a UK citizen, write to your MP to vote in favor of a motion to diplomatically boycott the Beijing 2022 Olympics. You can do so here.