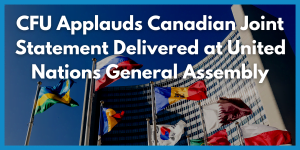 Campaign for Uyghurs (CFU) applauds the joint statement delivered by the Canadian government on behalf of 50 member nations condemning China’s persecution of Uyghurs at the UN General Assembly Third Committee. The statement called on China to adopt the recommendations laid out in the Office of the High Commissioner for Human Rights’s report on Uyghur human rights in August 2022, which called for an end to mass arbitrary detention and surveillance as well as establishing channels for Uyghurs abroad to contact their loved ones. Members included Australia, Belgium, Germany, Japan, Turkiye, the United Kingdom and the United States.

The statement was made after a side event hosted by 23 nations, who were also signatories of the joint statement, discussed the impact of China’s. Speakers at the side event included Jewher Ilham, daughter of imprisoned Uyghur academic Ilham Tohti, and Ziba Murat, daughter of Dr. Gulshan Abbas, a political prisoner held by the CCP in retaliation against CFU founder Rushan Abbas.

“More nations than ever are speaking out against China’s genocide, and this joint statement led by Canada shows it,” said CFU Executive Director Rushan Abbas. “The release of the report on Uyghur human rights, despite its weaker language from Beijing’s pressure, has spurred countries to act. Member nations cannot let China delay action or go consequence free. The CCP must be held to account for their genocide and crimes against humanity.”

CFU calls on the nations delivering the joint statement to work collaboratively to ensure the CCP cannot commit genocide with impunity. CFU urges all member states to condemn this genocide, and to remember the UN’s Responsibility to Protect. Upholding human rights and stopping genocide is a duty all nations bear, and cannot turn a blind eye to.