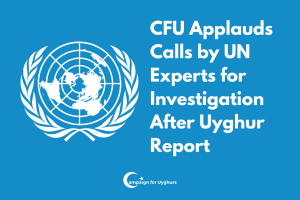 Campaign for Uyghurs (CFU) welcomes the recent call by a group of UN Special Procedure mandate-holders. They welcomed and supported the Office of the High Commissioner for Human Rights’ (OHCHR) recent report on human rights abuses in East Turkistan, expressing grave concerns over the abuses taking place. In particular, the experts expressed concern about the widespread misuse by the Chinese government of counterterrorism laws and policies. According to the statement, in addition to limiting freedom of religion, freedom of opinion and expression, and the right to privacy, China’s policies have hindered the legitimate exercise of many people’s most fundamental rights.

As part of their recommendations, the group called for an independent monitoring mechanism to be established in China, appoint a special envoy by the UN or by the General Assembly, and urged governments, UN agencies and businesses to demand human rights from China in bilateral dialogues. As the UN Secretary-General Antonio Guterres is expected to appoint Volker Turk as the new High Commissioner for Human Rights today, CFU hopes to see the new High Commissioner firmly and consistently advocate for human rights as their role should be to be the world’s leading human rights advocate, different from the role of a diplomat or political ambassador. Rather than a friendly dialogue with governments, victims should be shown solidarity and abuses should be publicly called out.

Executive Director Rushan Abbas said “I am relieved that the OHCHR report is causing ripple effects in the UN and international community, hopefully this will force China to address these grave human rights violations head on and send a message to Xi Jinping and his fellow genociders that the world is not going to turn a blind eye to genocide. Since the beginning of the Uyghur Genocide, the UN, investigators, experts, advocates and former camp detainess have worked tirelessly to shed light and document the horrors happening in East Turkistan, now is the time for tangible and practical actions to take place.”

Taking into account the recent findings of the OHCHR report, CFU calls on the UN Human Rights Council to hold a Special Session to establish an independent Commission of Inquiry(COI) to investigate the Uyghur peoples’ treatment under the Chinese regime. A proportionate response should be advocated by the UN Office on Genocide Prevention, which should assess the risks of atrocities against Uyghurs immediately. Lastly, CFU urges the global business community to immediately cut ties with entities that assist the Chinese regime in committing atrocities, including high-tech surveillance and slave labor programs.