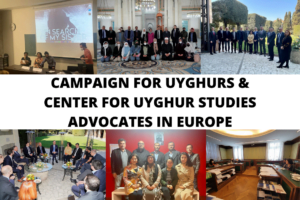 Campaign for Uyghurs (CFU) and the Center for Uyghur Studies (CUS) continued advocacy efforts in the European Union to generate support for the Uyghur cause. With the UN High Commissioner for Human Rights Michelle Bachelet set to visit East Turkistan in May, CFU, along with other Uyghur rights organizations, have called for the  High Commissioner to release her report. The European Union remains full of friends and allies who are vital in this fight against the CCP, and it was the great privilege of CFU to be able to reaffirm partnerships while fostering new ones.

In Spain, on March 21st, Executive Director Rushan Abbas, Abdulhakim Idris, the Executive Director of CUS, and Jawad Mir, the director and producer of the documentary “In Search of My Sister”, attended a screening of the documentary hosted by the Universidad Autónoma de Madrid (UAM) for Governance & Human Rights masters students, meeting with directors Antonio Rovira & Matilde Gurrera.

In Paris, Dilnur Reyhan, the President of the Uyghur Institute, hosted a screening at the National Institute of Languages and Oriental Civilizations, Inalco, and followed by a Q&A which was disrupted by an Uyghur genocide denier.

Later, in Rome, Rushan Abbas, Abdulhakim Idris, and Jawad Mir attended the film screening of “In Search of My Sister” together with ambassadors, diplomats and religious leaders hosted by the US Embassy to the Holy See. Chargé d’Affaires Patrick D. Connell delivered the welcome speech. Rushan Abbas and Abdulhakim Idris spoke at the Senate Foreign Affairs Commission on the Uyghur genocide. Abbas and Idris were also hosted by the Charge d’Affaires Thomas Smitham at the US Ambassador’s residence with Italian parliamentarians. Next, Rushan Abbas gave a presentation at the Roma Tre University. A special roundtable discussion took place at the Mosque of Rome at the Islamic Cultural Center of Rome. Finally, an important meeting was conducted with the president of the ‘Holocaust Museum’ at the Roman Ghetto, who offered  help with highlighting the Uyghur genocide.

From the recent advocacy in Europe, Ms. Abbas said “It is absolutely vital to continue to share the plight of the Uyghurs and educate the general public of the veracity of the Uyghur genocide, as well as brief lawmakers. I am grateful for partners who can help us create the type of international response that is necessary to bring this genocide to an end. I want to express my appreciation to everyone who gave their time and energy to help us for our outreach work. Meeting with various organizations, senators and ministers of Parliament in Europe, together with the diplomats and ambassadors of US embassies and consulates throughout Europe, has been an extremely gratifying opportunity.”

Looking to the future, the world must recognize that the CCP is a genocidal regime. We must certify that our alliance continues to grow all around the world and that there is a guarantee of equal rights for all Uyghurs that face extermination, so we continue to fight onwards.