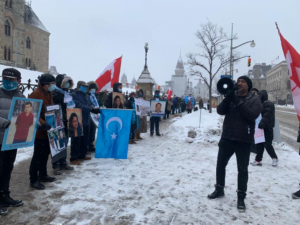 Campaign for Uyghurs (CFU) commends the passing of the opposition motion in the House of Commons acknowledging that China’s actions are in line with the atrocities defined in the Genocide Convention. We hope that this motion spurs action in the current minority liberal government of Canada to recognize what is happening to the Uyghurs as a genocide, and that the Canadian government will enact tougher restrictions on consumer goods and materials imported from East Turkistan, to prevent the flow of goods made with Uyghur forced labor.

The amended motion calling for the relocation of the 2022 Winter Olympics was a welcome addition. CFU applauds the House of Commons for voting to amend the original motion to also mention the Olympics and its relation to the genocide China is perpetrating. This motion echoes the sentiments of Uyghur and human rights organizations that genocidal states should not be allowed to host prestigious global events.

CFU is disappointed that Prime Minister Justin Trudeau and his cabinet abstained from voting on the Opposition Motion bill brought to the House of Commons. The Canadian government, and Prime Minister Trudeau, have claimed to champion human rights around the globe, however, this action is exactly the opposite. Abstaining from voting is an abstention from justice. Acknowledging the genocide that China has been perpetrating against the Uyghur people is a recognition of the suffering of the Uyghurs and a step towards justice. The evidence of a genocide is overwhelming in the presence of forced labor schemes, mass detention of Uyghurs, forced sterilization of Uyghur women, and the forcible transfer of Uyghur children to state-run facilities.

While a definition will not bring an immediate end to the sufferings of the Uyghur people, it is a vital step towards addressing them by acknowledging the realities of what is happening. There should be no further dancing around the issue: Beijing is committing genocide, and those who choose to downplay this are standing on the wrong side of humanity.

To learn more about the movement against the Beijing 2022 Olympics, visit #NoBeijing2022.