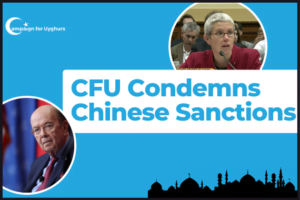 Campaign For Uyghurs (CFU) condemns the Chinese Communist Party’s sanctions which  were announced against individuals and included Former Commerce Secretary Wilbur Ross, Carolyn Bartholomew, Chair of the US-China Economic and Security Review Commission, and Adam King of the International Republican Institute. Such sanctions by Beijing are used to retaliate against anyone who dares to push back against China’s growing threat to global democracy and human rights.

Dr. Sophie Richardson, Human Rights Watch’s China Director, was also a target. Dr. Richardson has long been at the forefront of human rights attention to the Uyghur genocide. Her work has been integral to bringing the cause of the Uyghurs into the international spotlight, and she has long championed organizations who aim to build grassroots capacity. As an expert in her field, her research and dedication have been invaluable for human rights defenders worldwide.

These sanctions preceded the meeting between US and Chinese diplomats in Beijing, making their timing a clear signal. Negotiations that begin from a point of non-mutual recognition of human rights can offer very little productive gain. As the genocide of the Uyghurs continues at an alarming pace, we must ensure that activists and human rights groups do not face undue influence and intimidation from the CCP.

CFU Executive Director Rushan Abbas remarked that “This is yet another example of a clear pattern of retaliation that the CCP has long relied on to suppress democracy and undermine the rule of law. Their retaliation against Uyghur activists abroad has been ongoing for over a decade now, making their families pawns in their colonial goals. We must not stand idly by as the reach of the CCP grows and continues its attempts to silence the West. Rather, we must demand an end to this genocide.”

Sanctions are designed to discourage governments and those within them from engaging in activity that the international community considers to be incompatible with the international order. The CCP is using this enforcement mechanism to target those who seek to uphold that very international order. How can we hope to negotiate with the Chinese regime while they are clearly not willing to show even the most basic respect to those living within their borders, failing to recognize them as human beings? As they hide the truth about a pandemic, the aftermath of natural disasters, and genocide, it’s time for the world to say: enough is enough.