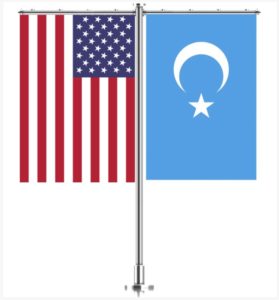 Campaign for Uyghurs (CFU) is thrilled by the passage of the Uyghur Human Rights Policy Act of 2020. We are thankful for the United States Legislature’s demonstration of global leadership in making the moral choice to take concrete action to reaffirm the human dignity of the Uyghur people abused in East Turkistan by the Chinese Communist regime.  This action on the part of the government of the United States demonstrates exemplary global leadership that we hope will be emulated by the civilized nations of the world.

The tangible steps laid out to end U.S. complicity with these human rights abuses, as well as the important steps are taken to protect Uyghurs who suffer harassment when they speak out overseas, are extremely important and must be similarly adopted by other countries around the world. Tyrannical states like China must be held accountable for their human rights abuses and this bill serves as a reminder that exploitation and inhumane behaviors will not be left unchecked.

There is a magnitude of work still to be done in order to stop the horrific harms that have been done to the Uyghur people and to overcome the trauma inflicted upon them, and we call on the international community to take the necessary steps to hold the Chinese government and Xi Jinping’s terrorist regime accountable for their crimes against humanity. As stated in the text of the bill,  the situation happening to Uyghurs, Kazakhs, and other Muslims is indeed a “slow motion Tiananmen.” The global community has already been too slow in their response; may this lend momentum to the pledge “never again”.

CFU recognizes the hard work that advanced the policy act this far and we hope that it will soon become law, providing the President with the power to enforce sanctions on Chinese government officials and anyone complicit in human rights violations against the Uyghurs.

CFU is also thrilled to hear that Nury Turkel has been appointed by Speaker Nancy Pelosi as a commissioner for the United States Commission on International Religious Freedom  (USCIRF). CFU’s Executive Director, Rushan Abbas remarked, “Mr. Turkel will be the first Uyghur Muslim to serve as a commissioner and I am confident that he will be a fantastic addition to the Commission. As China wages a war against Uyghurs and Islam, it is important that Uyghur Muslims are recognized for their achievements and given a platform where we can use our voice to speak on this atrocity.”

Please take a few seconds to sign this petition below, to help Ziba Murat and get her mother Dr. Gulshan Abbas release from China’s concentration camps. We want her to hold her grandkids again, we want to hear her voice again. Together, we can bring her home!  Finally, we plead to the international communities & human rights organizations to help us raise awareness of her case and assist us in seeking her immediate release.