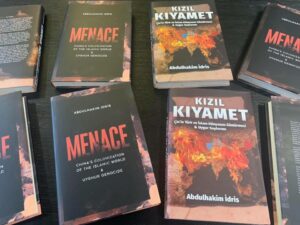 Campaign For Uyghurs (CFU) is pleased to announce the release of the first English-language book from an Uyghur perspective on the neo-colonialism that the Chinese regime is bringing to the world, and the Uyghur genocide. The book has also been published in Turkish, coming soon to Amazon for purchase. Published by the newly established Center for Uyghur Studies, the release marks what CFU hopes will be the beginning of a widespread push to include the voices of Uyghur scholars on the crisis facing their own people.

Written by Mr. Abdulhakim Idris, Inspector General of the World Uyghur Congress and an Islamic scholar who studied in Al-Azhar University in Egypt, the focus on the dangers for the Islamic world comes at a key point in time to raise awareness with Muslim-majority countries who have thus far remained largely silent on the genocide facing their Muslim brothers and sisters, at the expense of their own sovereignty and security.

In a statement regarding his intentions in writing the book, Mr. Idris said that “I wrote this book to expose the extent of China’s grip over both the Islamic world and the West with the Uyghur people’s experience and perspective, and have shown how it would be to live under such a totalitarian system. East Turkistan is a gateway for China to expand its colonial policies westward to other countries, and it is important we remain vigilant and involved in not allowing its sphere of influence to grow more than it already has.”

Campaign For Uyghurs is very pleased to have this volume available as a tool to educate and inform as we continue with our advocacy work. While the Chinese regime targets the globe with its expansionist policies and programs like the Belt and Road Initiative, it becomes more and more essential that the messaging of human rights organizations speaks clearly on identifying the goals of the regime as primary motivators behind the Uyghur genocide.

For this reason, CFU is supportive of legislative efforts such as the Sister City Transparency Act, which is a means of pushing for greater transparency for these platforms which are used by the CCP to push the Belt and Road Initiative. Collaborative efforts between groups affected by CCP brutalities to work together to end this threat to humanity must be supported. Spotlighting the voices of scholars like Mr. Idris, who has the knowledge and context to explain the issue beyond that of the U.S. perspective, remains an essential part of raising understanding of the gravity of the situation that we face.