Campaign for Uyghurs (CFU) demands the immediate resignation of High Commissioner of Human Rights Michelle Bachelet. Her six-day visit was squandered. The High Commissioner has provided zero transparency about the trip, and her prison visit is a  Potemkin-style sham. Bachelet neglects the duties of her office, her mandate to the world to stand up for human rights, and the UN’s founding principles. 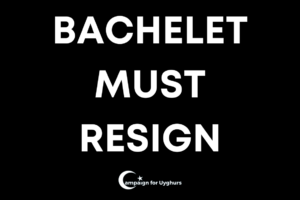 In her press conference addressing her visit to China and the Uyghur homeland, Bachelet used the language of the CCP and adopted their talking points. Notably, she called the genocidal policies of the Chinese regime “deradicalization” and “anti-terrorism” efforts, repeating Beijing’s talking points. Her comments seem custom made for the PRC propaganda machine and are particularly egregious in the week the world saw images of the horrific conditions in the internment camps courtesy of the Xinjiang Police files where Xi Jingping demands new camps be built because of overcrowding and Chen Quanguo issues a “shoot to kill order” because of it.

With thousands of testimonies from families of victims, and many leaked Chinese government’s own documents, her statement at the press conference was a complete neglegence of her responsilities and an insult for the victims of China’s genocide. How can she mention global racism without mentioning the ongoing genocide the PRC perpetrates against people of East Turkistan? Racism is deplorable in all forms but when she does not call out genocide- and even serves as an apologist for it- how sincere is her concern for racism?

Executive Director of CFU Rushan Abbas stated, “We had some hopes, knowing Michelle Bachelet was a political prisoner, tortured and tormented for her beliefs. We thought she would be fair. She would not betray her conscience and she would defend the weak and oppressed. But what she did goes far beyond her inactivity and her silence for the last forty-some months since she was appointed as the Human Rights High Commissioner.

She made herself complicit with the Uyghur genocide and my people’s blood will be on her hands. Her statement is an insult to the millions of innocent victims of this genocide and spits in the face of the 2,884 Uyghur women, men, and children shown in photos. Bachelet legitimized  and whitewashed the genocide and crimes against humanity by the Chinese communist regime. Bachelet had a choice to do her job with integrity. She chose not to. She must resign now.”

Bachelet’s visit shows she is unable to see China objectively. China now has a stamp of approval from the UN. The High Commissioner should never have agreed to this visit without securing full access to the region. She has failed her duty of High Commissioner and disgraced the world in doing so.

CFU urges Bachelet to resign immediately. Bachelet must step down and we urge all individuals, organizations and governments around the world who care about human rights to demand and ensure her removal of her position and resign if she has a any humanity left in her.