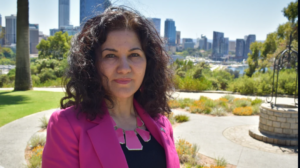 A US defence department official says as many as three million Uyghurs are imprisoned in Chinese detention camps. According to leaked documents, this includes Australian citizens. Uyghur human rights campaigner Rushan Abbas is in Perth to plead the case for action.

Rushan Abbas does not mince words about the brutal repression visited on her people by China’s communist regime.

The founder of Campaign for Uighurs and one of the world’s foremost advocates for the ethnic Muslim minority, said the mass imprisonment in China’s Xinjiang region was “the largest incarceration of one ethnicity since the Holocaust” and was a “cultural genocide”.

And despite the Chinese government’s protests to the contrary, Ms Abbas had no problem labelling the “vocational education and training centres”, in which as many as three million Uighurs are behind bars, as “concentration camps”.

She describes Xinjiang as akin to George Orwell’s dystopian surveillance state, rendered so terrifyingly in 1984.

Just last month, 400 pages of documents leaked to The New York Times from within the Chinese government exposed the thinking behind the crackdown in the eastern province. It was revealed Chinese president Xi Jinping called for an all-out struggle using “organs of dictatorship”, “a period of painful, interventionary treatment” all while showing “absolutely no mercy”.

The communist party’s top official in the province commanded a “smashing, obliterating offensive” and urged colleagues to “round up everyone who should be rounded up”, according to the Chinese government documents.

None of this is news to Ms Abbas.

She said her grandfather was thrown in prison during China’s Cultural Revolution, her father was in a re-education camp when she was born in 1967, and her sister and aunt were abducted by the government in 2018, just days after she spoke at a US think tank about the treatment of Uighurs.

“My aunt was released a few months later, but my sister, for the past 15 months I’ve had no information on her,” Ms Abbas said.

“I don’t even know if she’s alive or not.

“I am just one example of many Uighurs who bravely decide to speak about this atrocity, but then their family members are paying the consequences.”

Continuing to do business with China today, especially with those high tech security companies, is [to be] complicit with genocide, complicit with crimes against humanity.

She said the Chinese government used threats against family members still in the country to silence critics who had escaped.

But she urged Australians to pressure their politicians to put the plight of the Uighurs at the forefront in their dealings with China, criticising Australian governments who thought the issue could be overlooked just to pursue economic objectives.

“It’s not in Australia[‘s] interest to have those issues intertwined,” he said.

Ms Abbas said the Uighur issue should be on the table at every trade negotiation.

“If we unlink human rights and trade, if we look at this as two separate issues, what is the leverage then?” she said.

“How are we going to push the human rights for a government that doesn’t care about human rights?”

Ms Abbas said companies should be held to account for trading with Chinese companies working in Xinjiang.

“History is repeating itself,” she said.

“At that time, for those 12 years, countries continued to do business with Germany, enabling Germany’s economy to build more concentration camps, kill more people.

“This is exactly what’s happening now. The countries that continue to do business, enabling China’s economy, to kill my people.”

Ms Abbas became visibly moved when speaking about the official practice in Xinjiang of sending single males to live with Uighur families whose men had been imprisoned.

“Chinese media reported Han Chinese officials were deployed to Uighur homes to live there and monitor their daily lives, to supervise them and at the same time they are living in their bedrooms, while most of the men are taken,” she said.

“Imagine. I can’t believe that the world is not outraged by this.

“This did not happen anywhere in history.”

Ms Abbas questioned why such aggressive measures were not more widely reported in the media.

“Every day when there’s news on I’m watching, hoping that there will be a little glimpse, something,” she said.

“This is the largest incarceration of one ethnicity since the holocaust.

“Why is no one paying attention? Where are the journalists? Why are they not covering this?”

But Ms Abbas said she hoped ordinary Australians would take of the cause of her people and start to question why governments and corporations were so comfortable dealing with the regime in Beijing.

“This is the time to stand up and do something for the millions of innocent people,” she said.

“Yes, we have our family members back home.

“We have our loved ones, our friends, the people the Chinese government can retaliate against and who face the consequences for our actions, but brave Australians don’t have to worry about that because they don’t have somebody back in Xinjiang.

“So please be our voice, be the voice for those three million voiceless, defenceless people, and do something about this.”