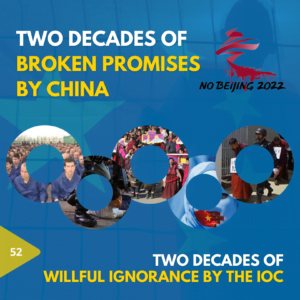 Hu Xijin, editor-in-chief of the Global Times, Chinese State-backed media outlet, recently tweeted that “China will seriously sanction any country that follows” a call to boycott the Olympics. This statement perfectly sums up what is undoubtedly the approach the Chinese regime would like to take, and also reflects the ways in which they view the concept of “diplomacy” in general.

In July of 2019, Campaign For Uyghurs (CFU) began to spread the #NoToBeijing2022 campaign. At that time ample warnings were given that moving forward with Beijing hosting was complicity in genocide. The legal opinion obtained by the World Uyghur Congress and the Uyghur Human Rights Project, as well as the atrocity determination from the U.S. State Department, and statement from the Subcommittee on International Human Rights in Canadian Parliament, this is what is happening, and the gravity of these crimes necessitates a response.

Since that time, further undeniable confirmation of this reality has been met with a determination on the part of the IOC to hide behind the lie of being “non-political” while ignoring the crimes against humanity that are being carried out through genocide. This is far beyond being a “political” situation.

While the points as to why the IOC’s decision to allow Beijing to host once again are numerous and damning, perhaps one of the most significant at the moment is the reality that the Uyghurs facing genocide may be viewed in another light: as hostages of an international criminal organization.

This event will be a repeat of the Berlin 1936 Olympics Games. Uyghurs are unable to speak freely with their family members. Every Uyghur in diaspora has at least one family member who has been unlawfully detained or missing, unable to be confirmed as being alive. Many were taken as a direct retaliation for having connections abroad. In what universe does this sound like it will fit with the supposed spirit of the Olympics games?

In reality, after Berlin and the failure of Beijing to reform for the 2008 Olympics, it is clear that no one should have any misunderstandings about the realities of what the IOC stands for: money and money alone. This leaves government, athletes, and corporate sponsors with the choice to make the moral decision necessary.

It is an unfortunate circumstance for the athletes who work their entire careers for the honor of representing in the Olympic games, but their voices decrying this are desperately needed. CFU Executive Director Rushan Abbas has consistently called to strip off Beijing’s hosting rights as a means of avoiding forcing athletes to choose in this unfair manner. They should never have been put into this circumstance by the corruption of the IOC.

Campaign For Uyghurs calls on the governments of the free world to apply a diplomatic boycott and to speak against corporate sponsorship of the “Genocide Olympics”. Those who choose profit over the values of humanity have their reputation sealed as contributing to the destruction of the human soul. We will continue to raise the point that there can be absolutely no cooperation with a genocidal regime.