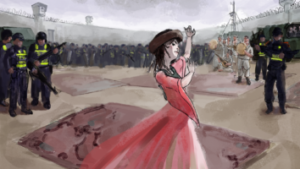 Another Form of Torture for the Uyghurs: Forced to Marry Han Chinese

Don’t let them bride their girls to faraway lands”

There is a famous folk song that circulated amongst Anatolians. The lyrics declare the unwillingness and unappreciation of marrying someone from far places, those beyond reach. The song speaks about those married women who long for their families and the sorrow of the young girls who were forced into marriage. Not so long ago, Anatolian soil witnessed the disturbing reality of your girls being so easily sacrificed in exchange for the hopes of gaining prosperity.

Now, we live in a time where exchanging a bride for payments to a family is no longer the norm. However, the Chinese Communist Party has started to force young Uyghur girls to marry Han Chinese men in our ancestral homeland of East Turkistan, just miles away from Turkey.

Uyghurs, who are both Muslim and Turkic do not accept intermarriage with Han Chinese because they wish to keep their ethnicity intact and pass on their Uyghur identity to the next generations. Therefore, until now, intermarriage between Uyghurs and Chinese was not practiced because Uyghurs have been able to avoid it by successfully opposing this practice which was pushed on them by one of the strongest powers in the world, China and the Communist Party regime. No matter how much they oppressed, Uyghurs managed to protect their religion, their language, and their roots. East Turkistan has become Chinas biggest obstacle in its efforts to dominate the global economy and international politics through the “Belt and Road Initiative.”

East Turkistan is rich in natural resources and is, therefore “easy-peasy” for China to occupy. In order to “paint the whole town red,” the Chinese Communist Party put in place systematic assimilation to indoctrinate the Uyghur community and block the opposition. The biggest step to accomplish this was to place Uyghurs into so-called “vocational training centers” which were built in 2014. It is common knowledge that over 2 million people have been placed in these “centers” and never heard from again. Even today, Uyghurs whose relatives were placed in the camps have heard no news on the whereabouts of those imprisoned.

The communist regime did not stop there; they placed one million Chinese cadres into Uyghur homes as “guests.” Now, they are building a system that monitors every breath that Uyghurs take. As the days go on, new methods are set up that assimilate the Uyghurs.

One of such methods is marrying off young Uyghur ladies to Han Chinese men, in an effort to make them extinct. The intermarriage of young ladies to men who do not have the same language, religion, and roots as they are not acceptable for the Turkish community.

In China, the same communist regime that allowed the “pain in the neck” coronavirus to spread, also tried to bribe Uyghurs with money to marry Han Chinese men. As if that was not enough, they released propaganda films, magazines, soap operas and news articles of the intermarriage, making it look as though these young Uyghur girls who got married to these Chinese men were happy. But the bribes of worldly goods were harshly rejected by the Uyghurs. Uyghurs faced mass oppression here. As the founder and Executive Director of Campaign for Uyghurs Rushan Abbas said “These marriages are done by force. If they refuse, either the “bride” or her family goes to the camps.” When you think about it, more than 1200 so-called “educational camps” in East Turkistan are set up in the same manner as the Nazi camps were; built for exterminating Jews. Obviously making the Uyghurs hopeless.

These girls who got married were not permitted to live with their culture and religion. An example of this oppression was, as Gulmira said, “young girls were forced to go dancing parties every week.” Another brutal form of oppression was forcing them to drink alcohol and eat pork.

U.S. Secretary of State, Mike Pompeo once described these horrible acts perpetrated by the Chinese as a “stain of the century.” Also, Muslim majority countries have been surprisingly weak to go against China’s forced marriage policies, despite believing in a religion where Prophet Muhammad gave no permission for forced marriage; even in the case where only the parents wanted it.

What was the folk song that belonged to Edirne, one of the flag cities in Turkey, saying?

I miss both mom and dad

I miss my village.”

It is time to end the yearnings of young Uyghurs’ girls and it is time to let them be reunited with their families.