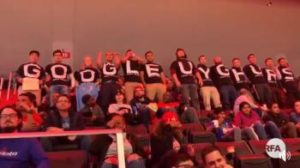 Spirits were high Wednesday night at Washington’s Capital One Arena, where a group of young Uighur activists — most of them U.S. citizens — came together at the Wizards’ home opener against the Houston Rockets to raise awareness of their peoples’ plight. But their calls for justice remain unanswered.

This scrappy group from around the tristate area wore shirts spelling out “Google Uyghurs” while chanting that, along with, “Free Uighurs! Free Hong Kong! Educate LeBron!” They were mocking Los Angeles Lakers star LeBron James for defending the Chinese government’s severe punishment of the National Basketball Association after Rockets general manager Daryl Morey tweeted out support for Hong Kong protesters. James said Morey was “either misinformed or not really educated on the situation.”