In response to the participation of a University of Manitoba faculty member in a panel denying the Uyghur genocide and defending the Chinese Communist Party, Campaign For Uyghurs initiated a letter on behalf of Uyghur organizations across the globe. You can read the letter below.

If you would like to to help us continue in our mission of advocating for the human rights & democratic freedoms of Uyghurs & other Turkic peoples facing genocide by the Chinese regime, please click here to make a donation. 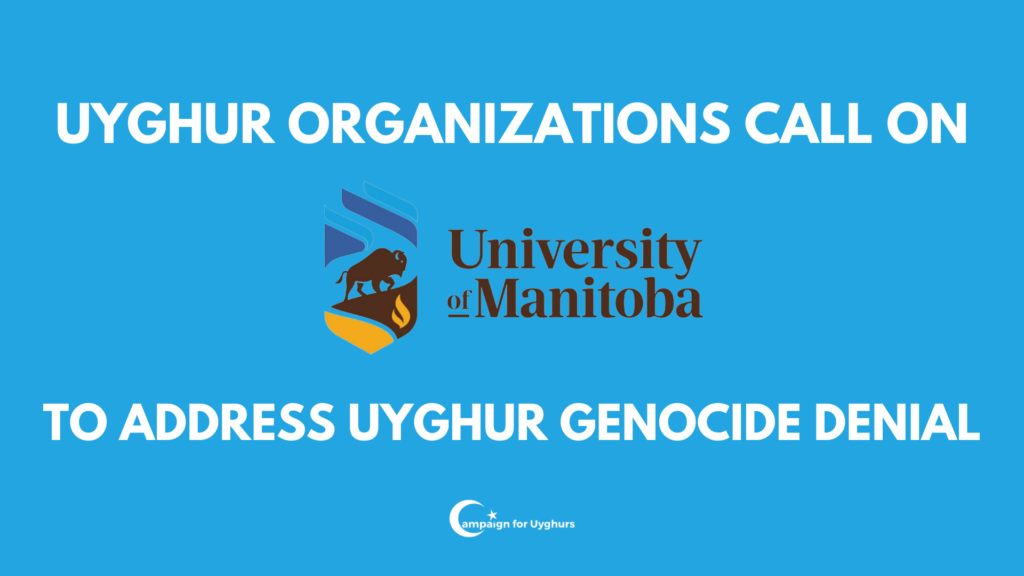 To Whom It May Concern:

We are writing as representatives of the Uyghur community who are working to end the active genocide of the Uyghur people being perpetuated by the Chinese Communist Party. You can imagine our horror when your faculty member, a Ms. Radhika Desai, moderated a panel held on March 19, 2021 which was sponsored by the China-Canada Council for Cooperation and Development; the Hamilton Coalition to Stop the War, Just Peace Advocates; and the Canadian Peace Congress entitled “Genocide in Xinjiang?”. The panel featured remarks from known defenders of the Chinese Communist Party and Uyghur genocide denialists, as well as from China’s Consul General in Calgary.

What is most disappointing and shocking for us was that the event organizers disabled the chat and question function for the participants and only allowed the genocide apologists and CCP propagandists to spread disinformation and false narratives about the brutal tragedies that Uyghurs are facing. This type of event cannot be presented as discourse and is against the very spirit of academia.

The panel lacked any representation from the Uyghur ethnic group being discussed, and as an academic institution, it’s appalling that any faculty member would feel justified participating in a panel whitewashing genocide and downplaying the voices of an ethnic group. That is a practice normally seen inside of China and within the Chinese regime’s state-run universities.

As the Chinese Communist Party’s brutal repression against the Uyghurs is being rightfully recognized as genocide and sanctioned by multiple countries, including Canada, those who would engage in genocide denialism should face consequences.

We hope better for your students, and urge the university to examine the implications of these types of actions coming from members of your faculty. It is imperative for the sake of educational integrity that a university respect academic freedom and prevent the compromising of ethics and principles of democracy.