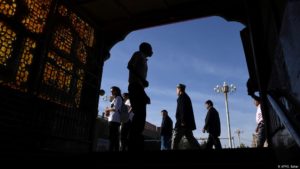 HONG KONG — The students booked their tickets home at the end of the semester, hoping for a relaxing break after exams and a summer of happy reunions with family in China’s far west.

Instead, they would soon be told that their parents were gone, relatives had vanished and neighbors were missing — all of them locked up in an expanding network of detention camps built to hold Muslim ethnic minorities.

The authorities in the Xinjiang region worried the situation was a powder keg. And so they prepared.

The leadership distributed a classified directive advising local officials to corner returning students as soon as they arrived and keep them quiet. It included a chillingly bureaucratic guide for how to handle their anguished questions, beginning with the most obvious: Where is my family?

“I’m sure that you will support them, because this is for their own good,” officials were advised to say, “and also for your own good.”

The directive was among 403 pages of internal documents that have been shared with The New York Times in one of the most significant leaks of government papers from inside China’s ruling Communist Party in decades. They provide an unprecedented inside view of the continuing clampdown in Xinjiang, in which the authorities have corralled as many as a million ethnic Uighurs, Kazakhs and others into internment camps and prisons over the past three years.

Read the Full Document: What Chinese Officials Told Children Whose Families Were Put in Camps

The party has rejected international criticism of the camps and described them as job-training centers that use mild methods to fight Islamic extremism. But the documents confirm the coercive nature of the crackdown in the words and orders of the very officials who conceived and orchestrated it.

Even as the government presented its efforts in Xinjiang to the public as benevolent and unexceptional, it discussed and organized a ruthless and extraordinary campaign in these internal communications. Senior party leaders are recorded ordering drastic and urgent action against extremist violence, including the mass detentions, and discussing the consequences with cool detachment.

Children saw their parents taken away, students wondered who would pay their tuition and crops could not be planted or harvested for lack of manpower, the reports noted. Yet officials were directed to tell people who complained to be grateful for the Communist Party’s help and stay quiet.

The leaked papers offer a striking picture of how the hidden machinery of the Chinese state carried out the country’s most far-reaching internment campaign since the Mao era. The key disclosures in the documents include:

• President Xi Jinping, the party chief, laid the groundwork for the crackdown in a series of speeches delivered in private to officials during and after a visit to Xinjiang in April 2014, just weeks after Uighur militants stabbed more than 150 people at a train station, killing 31. Mr. Xi called for an all-out “struggle against terrorism, infiltration and separatism” using the “organs of dictatorship,” and showing “absolutely no mercy.”

• Terrorist attacks abroad and the drawdown of American troops in Afghanistan heightened the leadership’s fears and helped shape the crackdown. Officials argued that attacks in Britain resulted from policies that put “human rights above security,” and Mr. Xi urged the party to emulate aspects of America’s “war on terror” after the Sept. 11 attacks.

• The internment camps in Xinjiang expanded rapidly after the appointment in August 2016 of Chen Quanguo, a zealous new party boss for the region. He distributed Mr. Xi’s speeches to justify the campaign and exhorted officials to “round up everyone who should be rounded up.”

• The crackdown encountered doubts and resistance from local officials who feared it would exacerbate ethnic tensions and stifle economic growth. Mr. Chen responded by purging officials suspected of standing in his way, including one county leader who was jailed after quietly releasing thousands of inmates from the camps.

The leaked papers consist of 24 documents, some of which contain duplicated material. They include nearly 200 pages of internal speeches by Mr. Xi and other leaders, and more than 150 pages of directives and reports on the surveillance and control of the Uighur population in Xinjiang. There are also references to plans to extend restrictions on Islam to other parts of China.