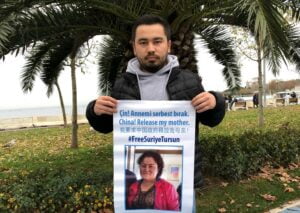 (About the author: Jevlan Shirmemet is an Uyghur activist who currently resides in Istanbul. Jevlan has been bringing attention to the case of his mother, Suriye Tursunun, who he has not seen or spoken to for three years. Jevlan has been working to highlight the Uyghur genocide and its oppressive regime in East Turkistan that is preventing him from reaching his loved ones at home.)

I am Jevlan Shirmemet, an Uyghur Turk, living in Istanbul and I have been looking for my mother, Suriye Tursun, since 2018. Just like millions of Uyghur Turks in East Turkistan, my mother was suddenly arrested by the Chinese police in early 2018.  After being detained in a concentration camp for nearly a year, she was sentenced to prison in late 2019 without a lawyer and without a formal trial.  My mother was born in 1964 and worked as a civil servant in the county of Korgas for a long time. She was a citizen who fulfilled the legal requirements of China and had not been involved in any crime. In March of 2013, my mother came to Turkey with a travel group that was organized by a Chinese travel agency. On her week-long trip, she met with me in Istanbul. According to the information I received later, her travel to Turkey and meeting with me were the supposed crimes that she committed. The Chinese side also said that sending me to study in Turkey is a sign of disrespectful behavior against a Chinese university. This is another crime my mom committed according to them.

My mother Suriye Tursun is a Chinese citizen and traveled on a passport issued by China. It is never a crime to travel from one country to another, nor to have children study abroad, whether under Chinese law or international law. At present, I do not know where my mother, who was sentenced in accordance with a Chinese sham court order, is being held and under what conditions.

Many of the millions of innocent Uyghurs who have been arrested in East Turkistan since 2017 have been sentenced to more than 15 years. The majority of them have been taken to the inner regions of China. We are also hearing that prisoners’ organs are stolen by organ harvesters to sell on the international black market. There is reported torture, slave labor, sudden deaths, and disappearances in the prisons and camps as verified by scholars and testimonies of camp survivors. All these things make me very worried about my mother’s condition.

She is an innocent person as are millions of Uyghurs in the camps and as a son, it is my basic right to know the general condition and whereabouts of my mother.

I studied law in order to protect my own and other people’s rights, but it seems that the law I studied and trusted was not enough for me to protect my mother. Firstly, I applied to the Chinese embassy in Turkey to learn the status of my mother, but I could not get further information from them except that my mother was imprisoned. They did not tell me in which prison or how her condition. My application to the Chinese embassy, ​​phone calls, faxing and face-to-face requests did not yield any results. After losing any hope in China’s law and justice, I applied for assistance in this matter a few times to the foreign ministry of the Republic of Turkey and to various political parties there, but I did not get the answer I expected. However, I still expected some hope from the Western democratic countries. I applied many times to international organizations such as the European Union human rights commission, Amnesty International, the UN Forced Extermination Organization, and the British Parliament, but so far, I have not been able to receive any answer or result from these inquiries either.

In most countries and regions in the world, people are fighting with all their might for democracy, human rights, to end discrimination based on race, religion, language, and culture, and are allowing diversity, reducing the regional difference, and pursuing the development of humanity together in the world, but China is committing genocide openly before the eyes of the world.

With its dictatorial regime, pre-modern ideology, harsh policies, and its racist behavior which are founded on the basis of chauvinism, China, throughout history, has smashed and assimilated great nations by dividing and destroying small nations by assimilation policies. When we look at the 71-year history of the Chinese communist party, we see that China assimilated and destroyed 55 other races that were different from Han Chinese and this is clear evidence of racism. The brutal policies that have been applied to nations such as the Uyghurs and Tibet, those that they cannot force to assimilate, and so the CCP that has been implementing genocide policy in East Turkistan for more than 3 years, which clearly revealed the inhuman nature of Chinese government.

I am very worried about my mother’s health, safety, and very life. Before I lose my hope in the justice of the world, the international justice system, values of democratic countries, and the humanity of people, I ask for democratic countries, international human rights organizations, and political parties to help to demand answers regarding the situation of my mother Suriye Tursun who is in China’s prison, and I strongly demand that they do their best to free my mother.

(Note from Campaign For Uyghurs)

Campaign For Uyghurs (CFU) will host a webinar on Friday, January 15th at 1:30 p.m. EST in order to highlight the requests that Uyghurs have for the international community. Uyghurs living in the diaspora are still searching for their families.  Mr. Jevlan Shirmemet will be one of the speakers.