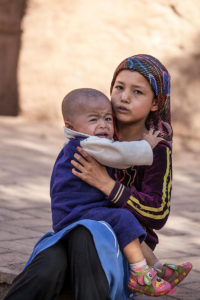 For the Past 60 Years, children have become the biggest victims of persecution

He was called into the police station, after which he hung up the phone and left his home. In order to prevent anything from happening to them, he didn’t speak to his wife or his four children.

“It was too dangerous for us to leave together in a large group. We left our poor families in the hands of Allah.

These two stories are reflections of the persecution of Uyghurs in East Turkistan which took place at different times. First is the story of Aziz, who came to Istanbul because of the recent rise of oppression. The second is the memoir/recollection of Mehmet Emin Buğra, one of the leaders of the East Turkistan cause and his departure from Urumqi. For the past 60 years, the main victims of these systematic atrocities were women and children. Especially kids. Concurrently, Mehmet Emin Buğra’s companion, a famous scholar, and pioneers of the East Turkistan cause, İsa Yusuf Alptekin’s daughter died following complications after her feet froze.

Today, more than 500 000 Uyghur children were taken to state-run “orphanages” after their mothers and fathers were taken to concentration camps. Meanwhile, as the Chinese Communist Party (CCP) was assimilating this younger generation, the Muslim community, consisting of over 1.8 billion people has failed to effectively remark on this because they want to preserve their economic interests.

The CCP has taken steps to reach hegemony by including both Muslim and Western countries in the “Belt and Road Initiative.” For years, the people of East Turkistan were an obstacle to the communist regime, preventing them from realizing this project. To overcome this obstacle, the CCP built concentration camps in 2014, similar to those the Nazi’s built to destroy Jews. After 2016, the regime began exiling Uyghurs to these camps. The first individuals placed in these Concentration camps were leaders, scholars, poets, and academics. Then those who had beards, those who prayed and those who recited the Qur’an were sent to the camps next. To convince the world that these weren’t concentration camps, Beijing named them “vocational training centers.” While they are “training” people, they are forcefully training them by brainwashing them with Chinese ideologies and propaganda.

The children whose parents were sent to the camps were left behind and then collected one by one and placed in state-run “orphanages.” According to the documents published by the New York Times, one of the leading publishing institutions of America, the number of Uyghur children placed in kindergartens is approximately 500 000. The main purpose of this is to completely purge the world of the Uyghur identity. The Chinese Ministry of Education’s defends these actions by claiming that this system is made to “increase children’s success.” According to allegations of the education authorities, who also implement this method supported by Xi Jinping, this system supposedly destroys “violent tendencies” in 8-year-olds. The way to achieve this goal is by not allowing children to properly meet their families and not allowing them to speak their native Uyghur language, which is the core of their identity.

Six-Month-Old Infants Taken Away from Their Mothers

These occurrences have been confirmed by research published by the World Uyghur Congress and Radio Free Asia. When local officials in Hotan and Kashgar were contacted, they confirmed that children were sent to orphanages. These publishers who contacted Chinese authorities on the topic were given the same aforementioned defense, claiming that the “children benefit from the possibilities and compassion given by the State.” However, as per accounts by employees of the orphanages, this is far from the truth. Moreover, recently, the number of Uyghur children brought into the orphanages has increased considerably. Amongst 12-year-old kids, there are also 6-month-old infants. The conditions of the orphanages have been deteriorating because the resources provided to these places are taken by the Chinese and never reach the orphanages. The food given to the children has also been getting worse; an example is rice soup. When the orphanage is due for inspection, they prepare two kids to show to hide the reality that the places they live in are like stables. An Uyghur who worked at the orphanage described the establishment in such a way that even a bird can’t enter inside. She also added that these kids are relocated to Chi a proper and forcible given for permanent adaptation by the Han Chinese families.

Until 2020, All Children Were Sent to Orphanages

A Human Rights Watch report draws attention to the fact that kids whose parents are in concentration camps also have families in the same city, but still, get placed in state-run orphanages. The same report states that the Uyghur District Communist Party Secretariat ordered all “orphan” children to be placed in orphanages until 2020. While in 2017 the percentage of kids placed in orphanages was at 24%, Beijing’s goal is to have it at 100% by the end of 2020. The China Coordinator of the HRW, Sophie Richardson’s reaction who evaluated the Anadolu agency’s report is striking: “Turkic Muslim children are being ripped away from their families for the supposed benefit of the child. This is part of a depraved government program.

It is evident that as more kids are being gathered into these orphanages, the capacity won’t be enough to sustain a large number of children. The Chinese government found a solution to this obstacle; they will build large dormitories that resemble prisons. According to the data obtained by the BBC from Uyghur families and other various sources in Istanbul, the cost of building these dormitories will cost the Chinese Communist Party 1.2 billion dollars. According to the Chinese Communist Party, the reason behind this large investment is “ensuring social stability and peace” by “schools replacing parents.” However, the reality is different as stated by the German researched, Adrian Zenz who remarked that “these schools provide the ideal environment for cultural engineering on minorities.” In schools, the Uyghur language and other foreign languages are not permitted to be spoken. The severity of this matter is evident in their punishment methods; those who speak a foreign language are punished with a low “score.” China’s main purpose is to create a new generation of “non-Uyghur” that is removed from its religion, language and overall Uyghur roots; through a method that has been systematically applied since 2017. The orphanage has advanced security systems, high walls and 10-volt electrical wires which shows how eerily similar they are to concentration camps.  Based on these facts, the researcher Zenz highlights that “the evidence obtained requires it to be called cultural genocide.” This evidence and the information provided by the victims is proof of this persecution. So, it is natural that mothers ask this question, “How does the whole world remain silent when these facts are so apparent?” It is their given right to direct this question to those who remain silent.

To put it simply, all these events are part of the decades of oppression and persecution of the East Turkistan people. Today, among those who have endured this suffering is Aziz, who came to Istanbul from Hoten and who continues to have hope of reuniting with his children. Mehmet Emin Buğra, one of the leading advocates of the Uyghur cause describes the rest of this voyage in his book that was published in 1952 in Istanbul, called “Doğu Türkistan Tarihi, Coğrafi ve Şimdiki Durumu” (The History of East Turkistan, It’s Geographical and Present Status); “The five-day dangerous road was ahead of us. We walked those challenging and unforgettable roads day and night, for three days. We walked in hunger, cold and misery. We caught up with other immigrants/travelers who were able to save themselves and escape. We found horses who starved to death. Most people had their extremities frozen and deformed. In this state, on December 11th, we arrived at the border of the city Ladakh, India. On the road, 65 people died of hunger and cold, and 55 people had their extremities frozen to the point of needing body parts amputated. İsa Yusuf Alptekin’s son and daughter were amongst those who had their feet frozen. This poor girl died from complications.”