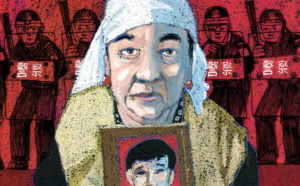 On May 10th we celebrate and honor the women who love us unconditionally. Let us acknowledge their endless contributions and pivotal roles in our societies. Mothers are the permanent symbols of affection, care, protection, and love that everyone so deeply craves. It is sobering to remember that at the hands of the Chinese Communist Party, millions of people do not get to experience this maternal bond.  Millions of Uyghur mothers themselves, or their children, are put in concentration camps, forced labor facilities, and state-run orphanages, and consequently never heard from again. In some cases, they are forced to cut ties in an effort to protect one another.

Simultaneously, there are Uyghur children who, deprived of their father figures, have grown into adulthood simultaneously without a mother’s love and care. Children are stripped of their childhood and mothers of their motherhood in the name of the Chinese economy, forced into slavery to produce goods for democratic countries and China alike.

Ziba Murat speaks on the abduction of her mother, Dr. Gulshan Abbas, “We lost contact with my mom since September 11, 2018…my sister had her second baby two weeks after mom was taken, and my mom doesn’t even know she has another granddaughter. We never thought we would raise our kids without my mom being part of it.”

For each of us who are blessed to have our mothers, may we be continually thankful, and may we never cease to advocate for those who have the most essential of human connections ripped away from them. Let us fight together to reunite desperate Uyghur mothers with their children.

CFU’s Executive Director Rushan Abbas, stated, “With the Chinese Communist Party’s current genocidal actions, Beijing continues to prove that it has no respect for the rule of law and undermines any fundamental rights. The international community must follow the principles of basic human dignity and hold China accountable.”

This Mother’s Day, we call on the Chinese government to release Dr. Gulshan Abbas and the millions of mothers who are likewise held in China’s concentration camps. For each mother separated from her children, the Chinese government and Xi Jinping further demonstrate their complete disregard for human decency and their crimes against humanity.