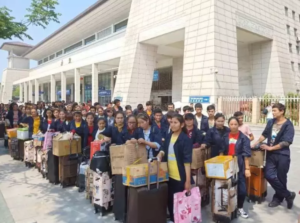 In an effort to deal with the pandemic, governments are urging their citizens to stay at home and practice social distancing. In some parts of the world, countries are enforcing lockdowns of entire cities and regions. People are told to stay home and avoid all social contact, unless it is absolutely necessary, limiting outside exposure to only acquiring groceries and seeking medical help. To limit the spread of China’s virus (COVID-19), countries are slowly migrating to Martial Law.

However, concurrently, Uyghurs are provided with no such protection against the virus. No resources or medical care to stay safe. In fact, China has taken measures to jeopardize Uyghur lives, by carrying out an exodus of Uyghur youth into mainland China where the virus is still rampant. The Chinese Communist Party has condemned this youth to a horrific death in an effort to enslave them into forced labor facilities.

Another byproduct of the coronavirus is the International Olympic Committee rescheduling the Tokyo Summer Olympics 2020 to the summer of 2021. As the virus continues to spread, the death toll soars and there is no cure on the horizon, these precautions are taken to ensure containment and a decrease in infected persons.

Since China was given the honor to hosting the Winter Olympics 2022, it is important to highlight the working values of the Olympic games, as they are not compatible with China’s governing principles. These are; universality and solidarity, unity in diversity, autonomy and good governance, and sustainability. When asked about why the Olympics are being held in a country which does not uphold the Olympic values, (on a private email message to IOC media relations team) the IOC stated, “These issues were raised with the government and local authorities and we received assurances that the principles of the Olympic Charter will be respected in the context of the Games.”

Merely inquiring the Chinese government to assure the IOC that the principles of the Olympic Charter will be upheld is not nearly sufficient. Especially owing to the fact that China is anything but transparent about its actions, especially pertaining to the human rights violations committed against Uyghurs and other Turkic Muslims. This inquiry is the same as global companies relying on China’s audits and due diligence processes put forth in forced labor facilities. China’s powerful and compelling façade in combination with the World’s proclivity to accept whatever China has to say is perpetuating these crimes against the humanity.

“Strengthening transparency, good governance and accountability are key elements of Olympic Agenda 2020. Based on these principles, the IOC is moving forward by including provisions in the Host City Contract aimed specifically at protecting human rights and countering corruption,” said IOC President Thomas Bach.

The IOC President Bach listed all the principles and values that China fails to uphold or even respect. There is no transparency, or accountability in regard to the coronavirus and definitely none in regard to their gross human rights abuses. China is not being held accountable for the atrocities being committed against the Uyghur and other Turkic Muslims and is most certainly failing to protect human rights. If the IOC does in fact only move forward with hosting Olympic games in countries where these base principles are upheld, then China would be the last country to host the 2022 Winter Olympics.

Campaign for Uyghurs (CFU)’s Executive Director, Rushan Abbas describes China being selected as a host for the Olympics as “a repeat of the 1936 games in Berlin, where Hitler announced the opening of the competition.” noting further that “it is putting in question the values of western democracies, the faith of the Islamic world and the overall conscience of all humanity!”

CFU calls on the international community to take actionable steps to hold China accountable, not only for the crimes against the Uyghurs, but for its lack of transparency in regard to the coronavirus. It is time for China to take responsibility for its actions and not be rewarded with hosting the Olympics. In these desperate times, we implore you not to forget about Uyghurs, Kazakhs and others who are suffering at the hand of China’s genocidal actions.

Campaign for Uyghurs (CFU) works to promote and advocate for the human rights and democratic freedoms for the Uyghurs and other Turkic people in East Turkistan (referred to in China as “Xinjiang Uyghur Autonomous Region”). It mobilizes individuals and the international community and builds bridges to take action on behalf of and to raise public awareness of the Uyghur issue with a special focus on Uyghur women and youth, and to activate persons and entities to work together to stop the systematic human rights abuses against the people of East Turkistan.

Our organization relies on grants, donations and contributions to sustain, develop and support its work and activities to promote human rights and democracy for the Uyghurs and other oppressed ethnicities in the East Turkistan.  Campaign for Uyghurs is a tax-exempt, non-profit organization under Section 501(c)(3) of the U.S. Tax Code. Your donation is tax deductible.

Please click here to donate and support Campaign For Uyghurs.