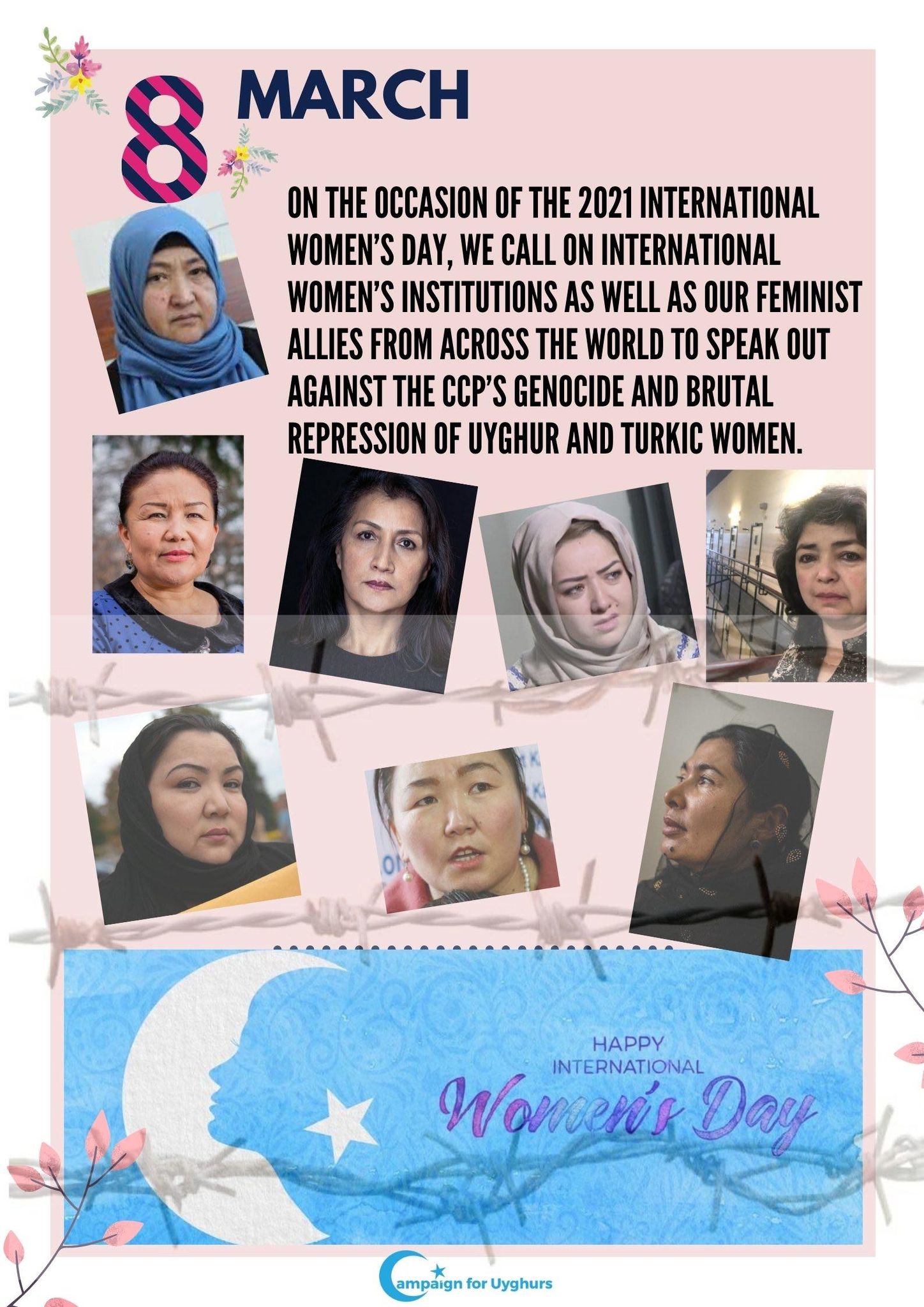 For whom is International Women’s Day?

The United Nations Women’s Organization (UN Women) organized a series of activities aimed at mobilizing the international community against the abuse of women. One of these events was held over the past months, on the website unpacktheeveryday.org. One particularly notable title is “Believe in the victims”. When this title is clicked, a two-line explanation ends with the phrase “Listen and support, even if it bothers you.” Some time after this event, the BBC published the story of three victims sent by the Chinese Communist regime to concentration camps in East Turkistan. The stories contain levels of violence and cruelty that really disturb the readers. The narrative of these three witnesses and other victims on various platforms reveals the extent of the genocide in East Turkistan. The UN Women’s organization has for some reason forgotten the word “believe in victims” when it comes to women from East Turkistan. So why?

Before answering this question, it is necessary to remember the equivalent of violence, rape and exploitation against women in international law. There have been norms protecting women in all sacred religions and in many countries since history. Since the 14th century, views that the rape of women should be considered a crime not only in times of peace but also in times of war have been brought to the agenda. The study of Olgun Miller, a Turkish academicians, titled “Acts of sexual violence against women as an international crime” examined the historical process in detail within the framework of international law. One of the notable names referred to by Miller is the Italian-born judge Alberico Gentili, who advised Queen Elizabeth I in England. Alberico Gentili suggested that rape of women in times of war should be punished as in peacetime, when international law was not even mentioned. The reflection of this radical proposition of the period made in the 16th century on international law has taken a long process to today. After the Holocaust in World War II, and the genocide in Bosnia and Herzegovina, and Rwanda in the recent past, women’s victimization has been evaluated more clearly in international law. What is happening in East Turkistan today is more painful than in times of war. Despite this, the striking silence of the world public opinion against China stands as an obstacle to the systematic rape of Uyghur women being considered a crime under international law.

The existence of any of the crimes listed in the United Nations Genocide Convention, the details of which are detailed on the website of the organization, is considered genocide. Bodily harm to the members of the group and preventing births in a way that will destroy the group’s existence are two of these items. In international law, crimes against humanity include acts such as destruction, rape, enslavement or forced labor. Speaking to the BBC, names such as Tursunay Ziawudun and Qelbinur Sedik are included in the scope of crimes against humanity and even genocide crimes. Because when we look at the details that need to be “listened to” as told by both victims and what the UN Women’s Organization said, it is obvious that on the one hand, mass rapes, and on the other hand, forced sterilization, and women were forced to work like slaves in China’s factories. The policies of the Chinese communist regime towards East Turkistan are also within the scope of crime in both scopes. Dr. Ezeli Azarkan’s study “Crimes against humanity in international law” examined the subject within the scope of three important events in recent history. These are cases in Nuremberg, where the perpetrators of the Holocaust in World War II were tried, the International Criminal Tribunal for the Former Yugoslavia (IYUCM), where Serbian gang rapes of Bosnian women were tried, and the Rwanda International Criminal Court (RUCM), which investigated the Rwanda genocide. They are the rulings of the Statutes of the Rome International Criminal Courts. In both the Nuremberg trials and the UN War Crimes Commission established after the Second World War, “the condition of having a systematic and comprehensive action” was sought in order for a crime against humanity to occur. In the evaluation of the rules regarding crimes against human security and peace by the International Law Commission within the UN, killing, extermination, enslavement, exile and suffering by the state or individuals or their civilians were seen as crimes against humanity. From this point of view, more than 1,200 camps built by the Beijing government in East Turkistan are filled by Uyghur, Kazakh, Kyrgyz and other members of the public, where women live and their employment as slaves fall under the aforementioned definitions.

The term ‘widespread’ in the UN International Law Commission’s Draft Rules on the Concept of Crime in 1996 is the RUCM 1st Trial Chamber ‘a large-scale, frequently repeated and comprehensive action taken directly and heavily collectively against a large number of victims’. If there were a court today that examines the genocide policies of the Chinese Communist regime against the Uyghurs, a similar assessment would undoubtedly emerge. Because, even in the documents published by China itself, it is stated that the so-called education camps in East Turkistan are a systematic, repeated and expanded action. This persecution of China is also included in the framework of following similar methods on the basis of common policies covering continuous public and private resources, which the UN Commission defines as “systematic”. In the Rome International Criminal Court Status, some of the sexual violence crimes within the scope of universal legal rules are listed as follows; rape, compulsory pregnancy and compulsory sterilization. The mandatory birth control report in East Turkistan published by German researcher Adrian Zenz and the live testimony of the victims show that China has committed all crimes against Uyghur women, both genocide and humanity. In the “Uyghurs for sale” report published by the Australian Institute of Strategic Policies, only 80 thousand Uyghurs were forced to work as slaves at the beginning of 2020, and even forced to work elsewhere, including women, is a crime in international law. Because, both Nuremberg, former Yugoslavia, Rwanda and Roman courts evaluated forced labor in this context. The latest news published by the BBC revealed that, contrary to what China claims, the statement that Uyghurs “voluntarily go to other places” from their families is just propaganda.

These decisions taken by the courts established after the human disasters of recent history and partially evaluated above are important reference points in terms of international law. Today, the protection of women and attempts to eradicate women from rape are considered as serious crimes in the laws of almost all countries. If this crime takes place as a state policy as China did in East Turkistan, it means that the incident has turned into genocide. Uyghur women, as they tell with great courage, ring the bells in the international public opinion as it is a situation that calls for “what is happening, where is humanity”.

UN Women, which should be the voice of women in the world, has organized programs to raise awareness in the international public opinion on the occasion of 8 March as expected. For example, while it is mentioned in the informative notes that 60 percent of women in the world work under the informal state, it is not allowed for Uyghur women to be driven to workshops like slaves or to have their hair cut and made accessories and exported. It has been pointed out that one out of every three women was physically or sexually assaulted, but the torture experienced by a Uyghur woman is not even mentioned in East Turkistan, when the link “Listen to the victims’ stories” is clicked on UN Woman’s Unpacktheeveryday.org platform. This “unconsciousness” went one step further, and Phumzile Mlambo-Ngcuka, the head of the UN Women’s organization, congratulated China for its alleged success in women’s rights, as if he praised the fox guarding the henhouse. The fact that the administration of the largest international organization on women never mentions the victimization of Uyghur women has been a black mark on Phumzile Mlambo-Ngcuka. When the UN Women’s Organization and International Women’s Day are mentioned, the silence of these organizations and their executives in every platform is the clearest indication that they protect the rights of women only if it does not harm their own interests.