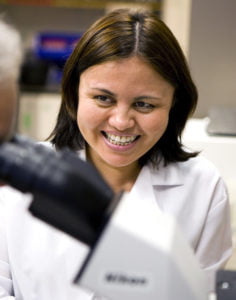 Maya attended Moscow Timiryazev Agricultural Academy and in 1988 she received her master’s degree in Genetics. She then returned to Almaty, Kazakhstan where she worked as a research assistant at the Institute of Experimental Biology.After earning her PhD from the Moscow Medical Genetics Institute in 1995, Maya was given a position as Senior Research Scientist there.

In 1996 a prominent professor-embryologist, Neal First invited Maya to work in his laboratory at University of Wisconsin-Madison. As a postdoctoral scientist in First’s lab, her colleague-scientists in Scotland cloned sheep Dolly. At that time, under First’s supervision, Maya was working on cloning calves. In 1997 Maya and Neal First appeared on the first page of a New York Times in an article written by Gina Kolata, who later published the book “Cloning”. Maya had published several scientific articles with Neal First on cloning and bovine embryonic stem cells. In 1999 Maya had cloned two calves from fibroblasts by using nuclear transfer technology.

In 2001 Maya accepted a job in the Australian biotech company BresaGen, Inc., where she was the first scientist working on human embryonic stem cells. Maya has since continually given training to scientists from around the world, participated in teaching programs as a faculty member at the Marine Biology Laboratory in Woods Hole, Massachusetts; Stanford University, California; University of Pittsburgh, Pennsylvania, and has even been given the nickname, “Stem Cell Queen”. In August 2005 Maya joined Whitehead Institute for Biomedical Research at MIT where she was offered the position of overseeing the first Human Stem Cell Laboratory.

In 2007 Maya brought her mom, Janet Kassymova, to the US. Ms. Kassymova was diagnosed with Parkinson’s disease. Instead of taking her to a care home, Maya became her mother’s sole caregiver for nearly 11 years. She learned everything she could on the disease. In the last five years Maya’s brother and sister from Almaty came to help her to take care of her mom. In September 2017 Maya lost her beloved mom in the battle to Parkinson’s disease. Maya’s mom is resting in Boston cemetery where Maya visits her every weekend.