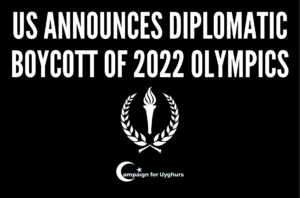 Today President Joe Biden has announced that the United States will engage in a diplomatic boycott of the 2022 Beijing Olympics. Campaign for Uyghurs (CFU) is pleased by this development and offers support for this action. The Uyghur genocide has cast a shadow over these games and made it morally untenable for them to occur in standard operation. It is CFU’s hope that other nations will follow the lead of the United States and take decisive action against this genocidal regime.

In a press conference this morning, Press Secretary Jen Psaki stated that “The Biden administration will not send any diplomatic or official representation to the Beijing 2022 Olympic and paralympic games, given the PRC’s ongoing genocide and crimes against humanity in Xinjiang…” She continued “ …we will not be contributing to the fanfare of the games. US diplomats or official representation would treat these games as business-as-usual in the face of the PRC’s egregious human rights abuses and atrocities in Xinjiang.”

CFU Executive Director Rushan Abbas said “It is always a positive step when the efforts of thousands of activists and individuals are made manifest in concrete action, and today is no different. We reject that there can be such a thing as an Olympic celebration when so many in East Turkistan are treated as less than human by the Chinese Communist Party. We reject that there can be a symbol of peace when the camps and surveillance apparatuses there stand as monuments to atrocity. We reject the Olympic games in the midst of a genocide. This step sends a firm warning to the Chinese state that these rejections are shared by the United States government, and hopefully by other governments as well.”

Campaign for Uyghurs has been proud to work alongside other advocacy groups on the Berlin-Beijing campaign, which calls for a boycott of these games in the historical context of the 1936 Berlin Olympics. This is a major success of that campaign, but work remains to be done to create an international response to the 2022 games. Consider aiding the campaign however you can,  joining the movement to support Uyghur rights. Together, we will see an end to the genocide.