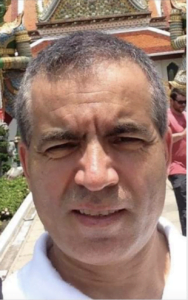 Chairman of the Advisory Board Members

Turdi Hoja works as a Research Scientist at one of the major pharmaceutical companies in the U.S. He was compelled to be involved in activism after the Ghulja protests in February of 1997. As he watched the TV footage recorded from the official Chinese broadcasting, he realized that the protesters are about his age and if he didn’t speak up then, he wouldn’t ever be able to visit his family and friends back home. Being one of the few Uyghurs in the U.S., he found it his duty to speak up on behalf of the fallen young men. After reports were becoming widespread, Turdi first became involved when he organized a protest with some friends to publicize the Chinese atrocities. In 1998 him and his friends founded the Uyghur American Association where he served on the board of directors until 2000 and then president between 2000-2002. He has since then been a vocal supporter of the Human Rights activities of Uyghur organization throughout the years.