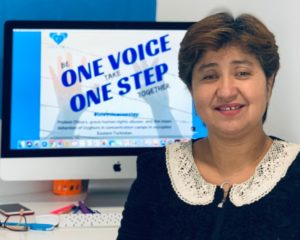 Mukerrem Qurban is the Director of the Canada Outreach for Campaign for Uyghurs. She was born in East Turkistan and studied at Xinjiang University in 1985. In 1989 she finished schooling and went to work as an editor for a local newspaper. Mukerrem has been involved in the cause since her youth and her participation has grown since then. She has been involved in organizing student movements against the CCP, planning activities, events, rallies and creating posters to raise awareness.

She had proven to be an asset at the pro-democracy demonstrations at Xinjiang University in 1985 and 1989. In 2002, she left East Turkistan to study abroad in Edmonton, Canada where she also held many protests and events. She also organized plethora of Uyghur events globally, including Germany and France. She is part of the One Voice, One Step Movement; The first time the event was held, she organized a photo gallery, press conferences and protests.