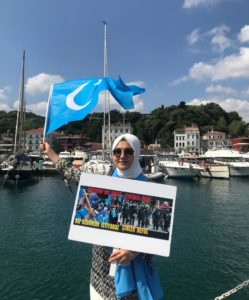 Dilnur Kroren is a Uyghur from East Turkistan. She moved to Turkey in July 2016. She now resides in Istanbul where she continues her tertiary education and a university there. Her goals are to fight the persecution and discrimination of Uyghurs in China. In September 2019, she joined Campaign for Uyghurs in order to fight the injustice and help with her activism and advocacy against China.

Dilnur manages the Turkish social media for Campaign for Uyghurs. She serves for Uyghurs as a member of several organizations and groups. She is a board member of the Uyghur Academy and also works in the Uyghur Student Unions. In addition, she also served in a group which formed the Uyghur Volunteer Girls who are studying at universities in Istanbul. Her main goal is to serve Uyghurs in any way she can.