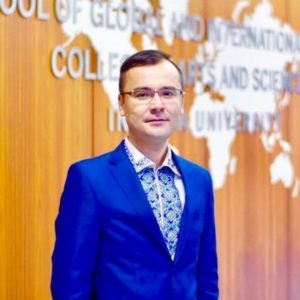 Mustafa Aksu’s interest lie in language policy and surplus labor transfer policy of the Chine government in Xinjiang, Turkic languages and the Uyghur diaspora in the Middle East and Central Asia. Mustafa is a Ph.D. student in the Department of Central Eurasian Studies at Indiana University Bloomington. He obtained his undergraduate degree in Linguistics, Languages and Cultures from a Chinese university and a master’s degree from a Turkish university. In addition to being extensively involved in his academics, Mustafa is also been very active in speaking about the Uyghur plight at universities, churches, mosques and synagogues across the U.S. He has moderated and presented at multiple international conferences.

Mustafa also organized and hosted one of the first panels among U.S. universities on “Mass Incarceration: China’s Radical and Dangerous Policies in Xinjiang,” along with the well-attended Uyghur Language & Culture Night in October 2019 at Indiana University. He has also taught intensive Uyghur at the University of Wisconsin-Madison’s Summer Language Program in 2018. Furthermore, Mustafa served as a Uyghur language developed at the Center for Languages of the Central Asocial Region and as an outreach staff in the Center of the Study of the Middle East at Indiana University Bloomington. Before coming to the U.S., he had worked at lived in China, Turkey, UAE, UK and Singapore.