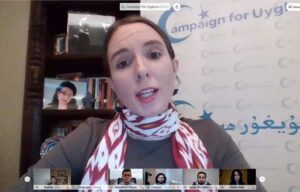 If you missed CFU’s recent panel event on January 15th, you can view it here. The following remarks were given in closing by CFU’s Communications Director, Julie Millsap:

As you heard from many of our panelists today, what is happening to the Uyghurs is absolutely unjustifiably brutal. The precedent that this sets for the world, and for future continuing atrocities, is something that must be swiftly addressed.

No matter how we might view relationships with China, it remains the reality that they are currently functioning as a dictatorial regime, wreaking destruction on any potential dissenters. The irony being, they are creating more by actions like this. People like the loved ones mentioned today were contributing to China, and to the world, with their peaceful lives and dedication to justice and good treatment for all. When a murderous leader and regime sit on the throne of power, the international community can have no business justifying or contributing to uphold such power.

This is not a matter of interfering in another nation’s affairs. As the United States has been the first to significantly address the issue, we must also acknowledge that it hasn’t been the last. Justice will come. I often hear people saying that the United States should worry about its own house first. As you have heard today, this is also a U.S. issue. By refusing to fight something so atrociously evil, we set a dangerous precedent for our own country as well. By refusing our own business complicity in these genocidal crimes, we are not just failing to address them, we are contributing to them. This is very much our issue to address. This is why this must be prioritized.

Because of our own nation’s painful past mistakes, we can recognize what is happening. Europe should also recognize it on this basis. And yet we see so many leaders making decisions based on the short-term economic benefits that will be the undoing of a civilized world. The brave individuals on this call today should remind us of our duty as global citizens.

Today, on the 7th year anniversary of the day Professor Ilham Tohti was taken, we somberly recognize that we have been slow to respond to the signs of genocide.

Just one year ago, our organization, CFU, was widely criticized for using the word genocide. Many had the pragmatic desire to proceed with caution, and now we see the sad confirmation. Not so long ago, millions in the camps was viewed as an exaggeration. Before that, the existence of the camps was vehemently denied. I remind our audience again of the ways the Chinese regime has consistently contradicted and changed its own narrative. To carry on with any semblance of the idea that China can be trusted to act reliably on any front, is absolutely preposterous.

This is why actions like the genocide amendment in the UK are so vitally important: they are already late. Yesterday, the CECC released their annual report which details the somber realities of China at present. The suggestions therein must be implemented, and swiftly. As you have heard from our victims today, they are not policy experts. Those who are policy makers must listen to these voices rather than lobbyists who seek financial gain above humanity.

We call on the Biden administration, and leaders worldwide, to carry forward the momentum of previous developments to hold China accountable for its crimes and act swiftly to intervene, lest our late action be too late. It is already too late to undo the trauma that has been done to an entire generation of innocent brothers and sisters, but we must stop the continuation of this genocide.

We thank you for attending this panel today, and hope that you will follow each of our panelists and Campaign For Uyghurs on social media to stay informed and engaged.